Pour It on! Maple syrup is good for you

Kiri Tannenaum of the Food Network explains why pure maple syrup is good for you.

The Benefits of Maple Syrup

Maple Syrup must meet exceedingly high standards for purity.  High quality syrup can be made only by evaporation of pure maple sap, and by weight must contain no less than 66 percent sugar. Grade A New York maple syrup is classified by its color.  The darker the syrup the stronger the taste.

The sugar in maple syrup is sucrose with small amounts of glucose and fructose sugar. White sugar is sucrose. There is no direct scientific evidence that maple syrup is healthier than white sugar. Diabetics need to treat maple syrup and sugar as they do other sugar products. Because it is a less refined sugar, maple products contain minerals, antioxidants, and other compounds that have been shown to have health advantages in other foods.

The overwhelming majority of maple syrup is produced in forests where no herbicides or pesticides have been applied. Therefore, most maple syrup would be considered organic. The requirements are stated by the particular organic certification organization, but generally state no use of substances (for example, fertilizers or pesticides) in the production process that would alter the pure nature of maple syrup.

Tips and Tricks for Cooking with Maple

* For baking Dark Color, Robust Taste or Very Dark Color, Strong Taste syrup will give you the richest flavor and color.

* You may equally substitute maple syrup for other sugars in a recipe.  Simply reduce the amount of one liquid ingredient by 3 tablespoons.

We Accept Cash and Checks 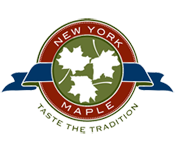